The Ubiquiti UniFi U6 Lite - A Worthy Purchase?

Ubiquiti's WiFi 6-enabled U6 Lite access point is a capable piece of network hardware. But is it a worthy purchase given the current state of the market?

What is the UniFi U6 Lite?

Ubiquiti’s U6 Lite is one of the first WiFi 6-enabled access points from Ubiquiti. Part of its extremely popular UniFi range, the U6 Lite can be managed within the UniFi controller, or through the UniFi app.

More recently, Ubiquiti released the UniFi U6 LR. Due to supply issues and its being the newer of the two, the U6 LR is particularly difficult to get ahold of at the moment. That makes the more readily available U6 Lite one of the few WiFi 6-enabled Access Points available.

For the installers among you wondering whether it’s worth rolling out U6 Lites as your go-to APs, we’ll be examining the utility of the UniFi U6 Lite as a WiFi 6 AP in today’s market, in light of existing supply chain issues, product performance and Ubiquiti’s existing UniFi offerings.

The Current State of WiFi 6

Firstly, is it worth buying a WiFi 6 access point just yet?

In Q3 2021, WiFi 6 is still a new phenomenon. Without WiFi 6-enabled devices (phones, laptops etc), you simply won’t see any benefit from a WiFi 6-enabled access point. And when it comes to getting your hands on some WiFi 6 devices, there just isn’t a ton available on the market yet. Those that are out there are brand-new, premium models, so you can expect a hefty price tag.

In other words, it’s going to be a while before WiFi 6 grows into its usefulness. First, more WiFi 6-enabled devices need to be developed and purchased by consumers.

And what is the point of WiFi 6? Is it just faster wireless internet?

Well, yes. But also, no. WiFi 6 has been developed to specifically improve efficiency in high-density wireless network environments. High-density means many users, e.g. 40 users per access point vs 4.

As a consequence, it’s going to take more than buying yourself a WiFi 6 compatible phone to see the kind of performance boost you’re hoping for. Such performance improvements will be most noticeable in environments with many users: think offices, conference buildings, sports stadiums.

There are, however, existing technologies built to improve the wireless experience in high-density environments. Access points with 4x4 MU-MIMO, for example, popularly compared to a super-highway with four lanes for traffic in both directions, have been on the market for a while helping to solve just this problem.

How Does the U6 Lite Perform?

The current state of Wifi 6 aside, let’s see how the UniFi U6 Lite performs in a typical network environment.

We performed the kinds of tests that a typical home or office user would perform when testing their access points, giving a fairly accurate representation of real-world performance.

We tested three UniFi access points: the U6 Lite, the UAP AC Lite and the NanoHD. We tracked performance at 5 different locations of our office building, with distances ranging from just a couple of feet away from the AP with no obstructions, to about 20 metres away with a ceiling and multiple walls acting as obstructions.

First, with no alterations, testing the access points with default settings immediately upon booting from a factory reset and pointing at the ceiling. Then, loosely optimised by: (i) positioning them on the wall to transmit through the room; (ii) changing the data rate to ‘high’; (iii) changing the channel from the default channel 28 (heavily used in our office) to the sparsely used channel 40.

Here are the results:

You’ll notice straight away that the U6 Lite’s results are the lowest across the board. These results will make more sense when viewed as part of the overall picture. 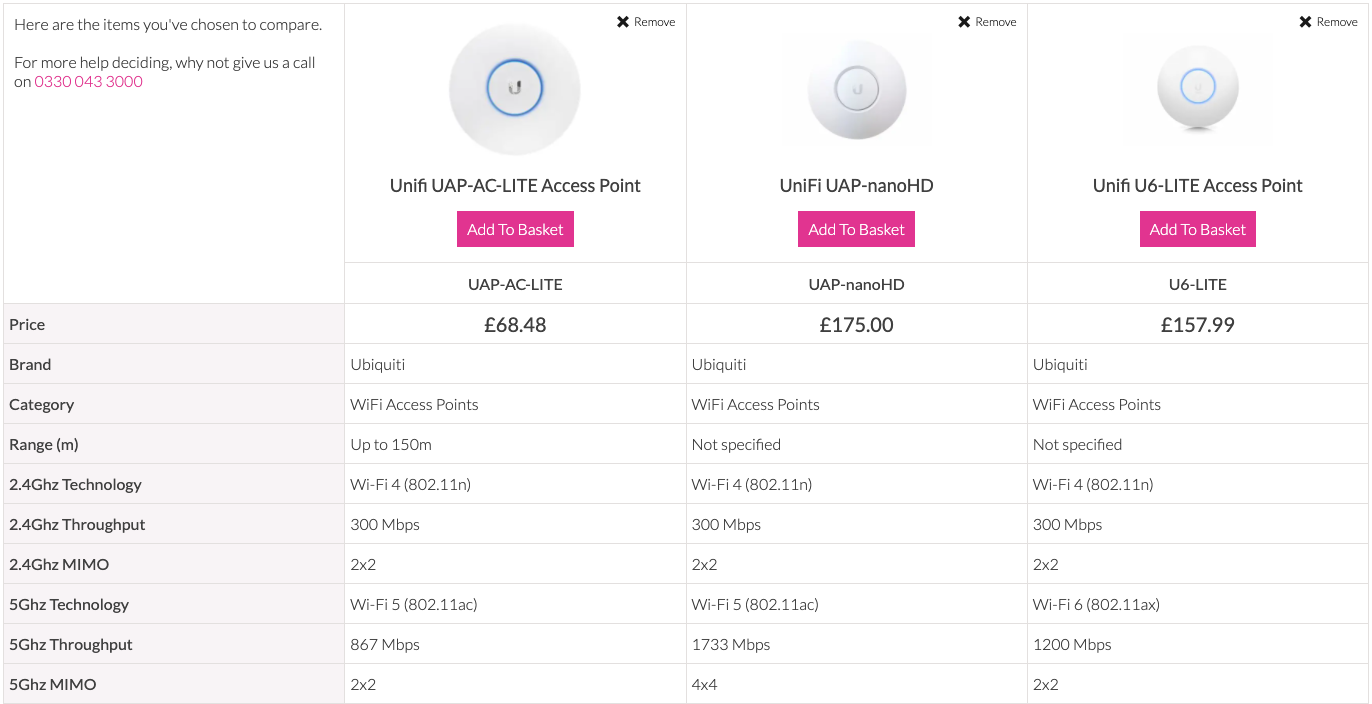 From the above comparison table, we can see that the U6 Lite is capable of 33% faster speeds than the AC Lite on the 5GHz band (1200Mbps vs 867Mbps). Since the U6 Lite is a newer model, we could guess that improved design is partly responsible, rather than only the introduction of WiFi 6, suggesting that most users should benefit at least a little from these higher speeds.

However, it’s worth noting, as alluded to in our introduction, that the presence of Wifi 6 isn’t enough to make up for the lack of 4x4 MU-MIMO. The NanoHD lacks WiFi 6 but is capable of 44% faster speeds than the U6 Lite on the 5GHz band.

All APs are capable of the same 300Mbps throughput on the 2.4GHz band, which is the band we tested, and all have the same 2x2 MIMO on that band. Importantly, average speeds don’t differ all that much, but it seems the U6 Lite still struggled the most.

Bear in mind that the prices listed in the above table were the prices listed on NetXL at the time of writing. Due to supply chain issues and the high costs of air freight at present, we’ve had to purchase our U6 Lites at a higher cost than usual, which is reflected in the price you see above. It should be noted that the MSRP for the UniFi U6 Lite is only $99, giving you a sense of how much prices have inflated.

With the prices sitting as they are at present, it makes sense to favour the NanoHD, given its better performance at a comparable price to the U6 Lite.

However, the U6 Lite’s performance seems a lot more favourable when viewed in light of its MSRP of $99. Suddenly, the NanoHD (with an MSRP of $179) seems expensive if you consider that the U6 Lite is going to reach its full potential sometime in the future, meaning you can expect better performance as time goes on. If you’re reading this at some point in the future when the U6 Lite is retailing closer to its MSRP, it might be the best option of the three.

The U6 Lite, despite its much lower MSRP, features the same premium build quality as the NanoHD. That is, it features a metal construction as opposed to the AC-Lite’s plastic construction. This lends the U6 Lite a comparatively premium feel and the heft you’d associate with a well-built product.

Even so, the choice of build material offers no practical benefit (there’s no vandal-proofing and the AP is indoor-only) except, perhaps, that metal is a better heat sink than plastic - perhaps a choice aimed at avoiding a performance bottleneck.

The NanoHD features various skins for visually customising your APs or helping to blend them with surroundings.

The U6 Lite features exactly the same footprint as the NanoHD, meaning you can (at a lower MSRP) customise your access points.

As already mentioned, the price of these access points really scales with the technologies they’re equipped with for dealing with high-density, high load network environments. Environments with many users per AP will benefit from more powerful units, especially if those users are performing bandwidth-hungry activities like video streaming.

Whilst the U6 Lite is WiFi 6-enabled on its 5GHz band, it will be a while before most networks will begin seeing benefits from WiFi 6 (as discussed). The NanoHD benefits from 4x4 MU-MIMO, which makes it very effective at handling these higher loads.

The AC Lite is primarily intended for lower density network environments and offers a lower range. Importantly, the U6 Lite offers comparable performance for a similar MSRP, with the added advantage of WiFi 6.

Despite performing suboptimally in our tests, the U6 Lites make sense as a longer-term investment for small businesses or smart homes wishing to future-proof their network environment. This becomes more strongly the case if these environments are, or will become, high-density, high-load environments where WiFi 6 will shine the brightest. Also, whilst we tested on the 2.4GHz band, it’s only the 5GHz band that WiFi 6 will operate on.

With the way things are going, network environments are going to accrue more and more devices - and more demanding ones. Some, like IoT devices, won’t necessarily be heavy bandwidth users but, as numbers increase, will contribute towards overloading older network hardware. Without 4x4 MU-MIMO, WiFi 6 will noticeably improve the wireless experience of a busy network. If you’re looking at using a low ratio of access points to users to serve high-density offices and other environments with dozens of heavy users, you’ll need all the help you can get. WiFi 6-enabled access points like the UniFi U6 Lite can help you here at a relatively low MSRP.

In terms of raw performance, the NanoHD is going to serve you better, but at an MSRP almost twice that of the U6 Lite, that’s what you’d expect. If you’ve been considering the UAP AC Lite, for only $10 more you can get a future-proofed access point with comparable performance in the U6 Lite. Though you likely won’t see the benefit from that additional spend for several years yet, this AP will allow you to take advantage of WiFi 6 once it becomes more widely available.

However, while the price of the U6 Lite remains inflated, you’ll be able to purchase NanoHDs for a comparable price and receive better performance, particularly in the short term. Since you won’t be benefitting from WiFi 6 for a while yet, if you have the budget for it, you might want to consider the NanoHD instead while prices for the U6 Lite remain high.