Patch App & Go is a hardware/app combo that sets out to simplify the process of network cable testing, reducing the number of on-site technicians required.

Who Is It For?

Patch App & Go is for installers of networking hardware and infrastructure or any team that regularly performs network cable testing and tracing from a patch panel. 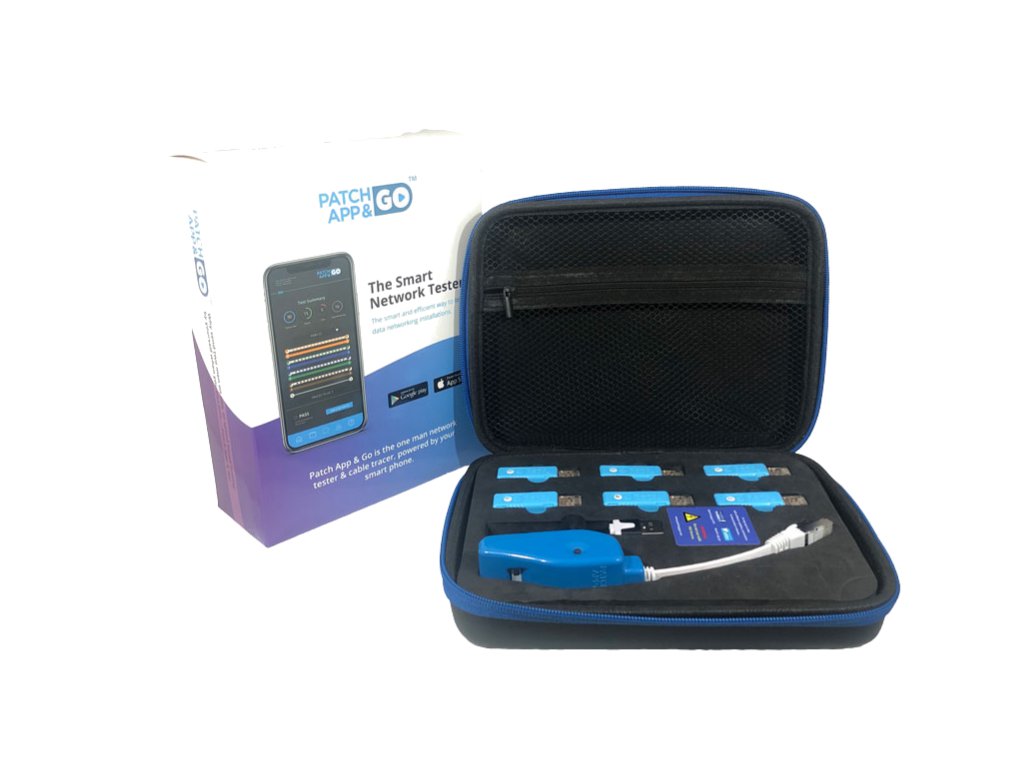 A hardware/app combination product, Patch App & Go is aimed at simplifying the process of cable testing from a patch panel. Traditionally, patch panel port testing would require a team of at least two. One member to stand at the panel itself and one to move from outlet to outlet through the various rooms of the building being wired and tested. These two communicate with each other to confirm when a test has passed or failed.

How Does Patch App & Go Work?

Versus standard master and single-slave unit testers, Patch App & Go upgrades the cable testing process. Requiring just one member of staff to effectively and efficiently test the wiring of networking infrastructure. The wireless Patch App & Go system improves the traditional single-slave system into multi-slave, with as many as 24 or more remote ‘smart plugs’ that can all be used in tandem with a single Bluetooth dongle that communicates with your smartphone.

Six smart plugs are included with the standard Patch App & Go kit, as well as a Bluetooth dongle that connects to your smartphone, to which you will download the free app.  Additional sets of six smart plugs can be purchased, allowing your technicians to quickly test each and every port on the panel in the least time possible.

The smart plugs are plugged into the various outlets throughout the home or office building being tested by your member of staff, who will then take the dongle to the patch panel itself.

The dongle is then inserted into each port of the patch panel sequentially. Once inserted, the app is used to test the connection between the dongle’s port and that holding the corresponding smart plug. 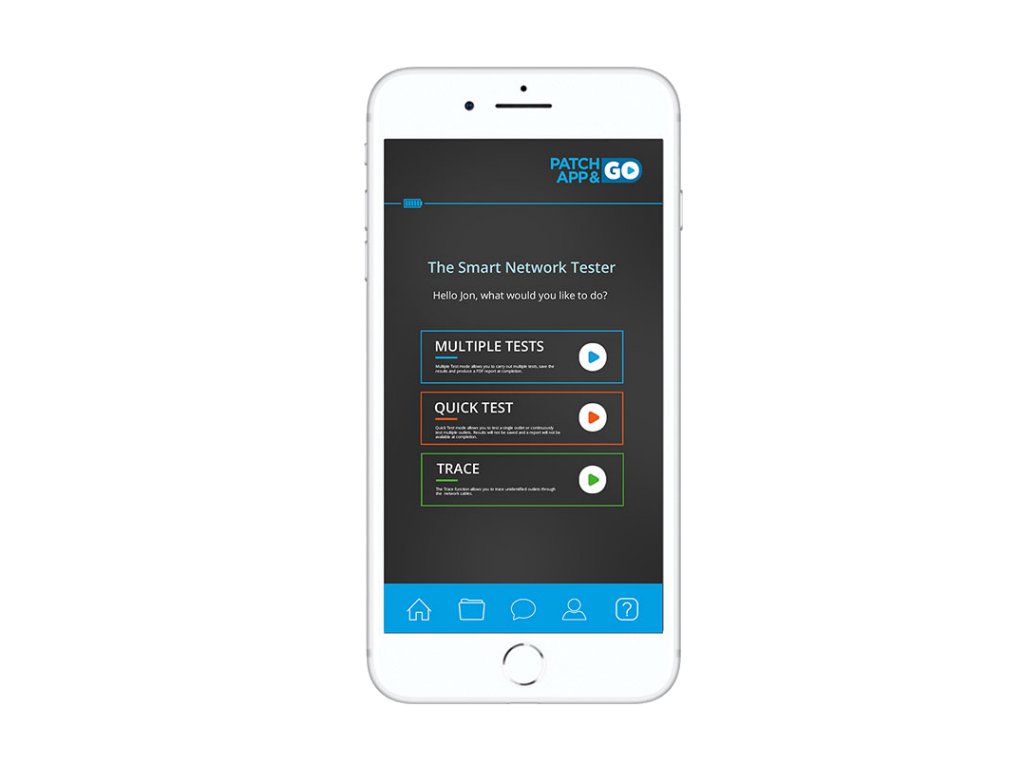 The Patch App & Go smartphone app for Android and iOS phones makes network cable testing intuitive and simple even for those with little experience or training, further cutting the costs involved in an installation.

The app boasts a handy ‘quick test’ feature, as well as an option for a full, documented test that will auto-generate a PDF report of the test results; again saving time for your staff members.

The quick test option does away with the paperwork and lets your technician test many ports in far less time. An encouraging sound chimes for a pass along with visual feedback from the app and a green LED on the Bluetooth dongle and relevant smart plug. If there is a fault, an informative but different chime is sounded, accompanied by a red LED on the dongle and relevant smart plug. The app itself will diagnose and display details of the fault, immediately feeding back to your technician the actions necessary to remedy the issue.

The app’s third function is a cable tracer mode, whereby Patch App & Go will trace the circuit from dongle to smart plug and display on your smartphone which numbered plug is connected to the other end of the circuit. For mapping poorly labelled circuits yourself, this is a huge time saver. 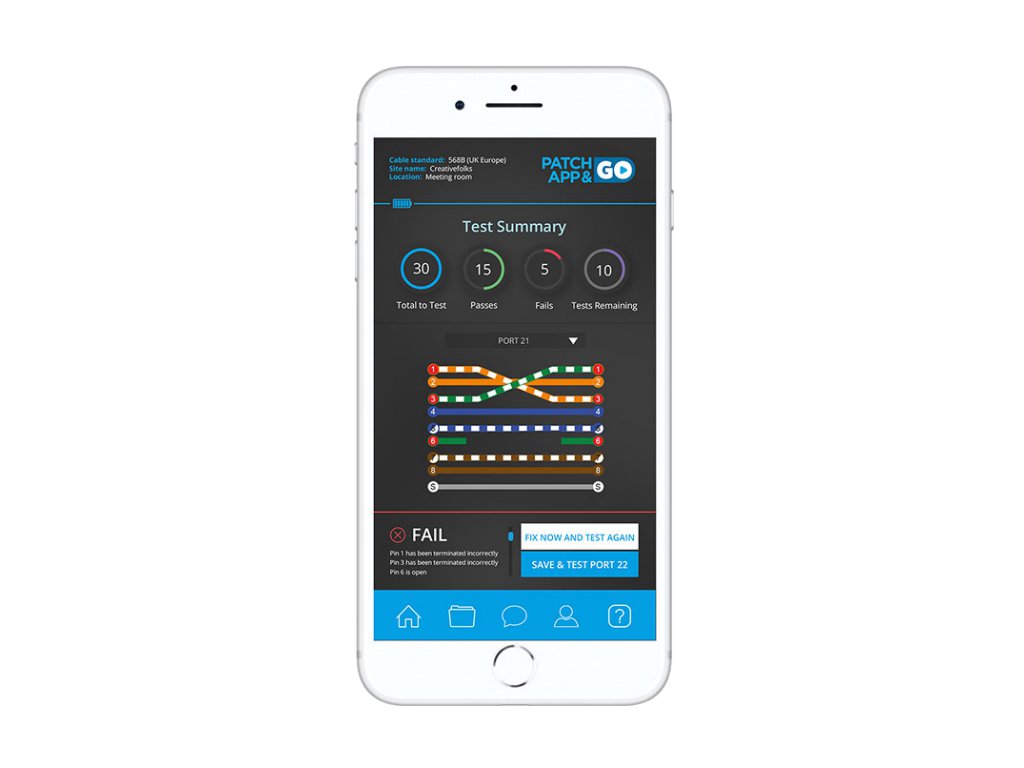 The smartphone app automatically diagnoses faults in the circuitry, saving your technicians time.

Patch App & Go lets your technicians work in the way that suits them, or in the manner best suited to the installation. Smart plugs can be plugged into the patch panel all at once and the technician can travel with the dongle to each outlet.

Whatever the manner you and your team prefer to work in, Patch App & Go is sure to save electricians, installers and network technicians time on the job. What’s more, by cutting the required number of staff for a test down to one, you’re halving the staff cost at the job site whilst ensuring that the time necessary to complete the job remains low.